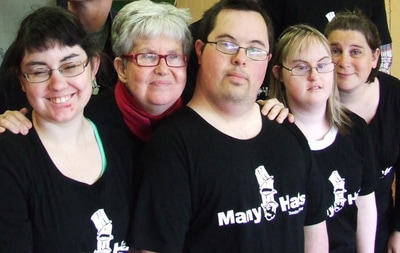 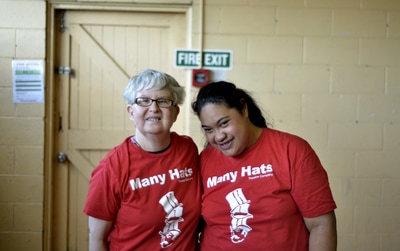 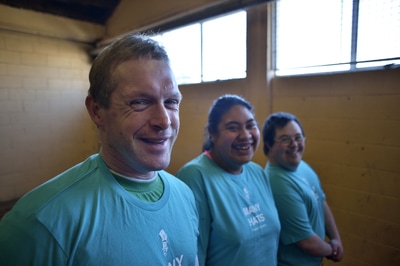 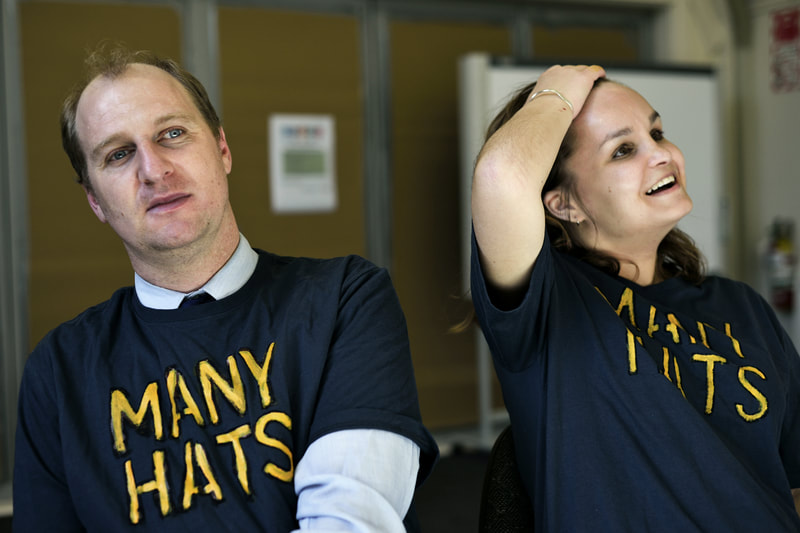 History of Many Hats

Many Hats is a theatre company made up of adults with intellectual disability. Skillwise, a community organization supporting adults with intellectual disability, asked us to develop and expand their drama course. So we lead audition workshops over a number of weeks with around forty applicants. Eventually reducing that number to ten individuals who showed a keen interest, potential and an aptitude to work well in a group.

We formed Many Hats Theatre Company. Taking a number of individuals with little or no theatrical experience and introduced them to a wide range of performance techniques. Everything from poetry and puppets to improvisation and verbatim theatre. We attempted to discover which approaches suited which performers, who responded well to what, who showed interest and the manner in which they engaged with the various approaches. From these modest beginnings we explored how the performer might best express themselves through these techniques. How these 'expressions' might be worked into scenes and from these scenes we developed a performance. Bringing in professional actors, theatre technicians and musicians to work with the group.

2014
In our first year we performed a show at the Court Theatre called 'A Sound and an Action'. All material was written by the performers. Either by direct writing of dialogue, stories and poetry; or through devised workshops in the rehearsal room; or, as on show nights by live improvisation on stage.

2015
In our second year we revised our original performance; adding fresh scenes, new writing and new performers to the company; and presented our 'Schools Project' at St Andrews College. Later that year we were invited back to conduct a workshop with their senior drama students.

2016
In our third year we made a feature film about the company. The film was neither a documentary nor a fiction. It lay somewhere between. Scenes devised by the company and acted out for the camera sat next to vignettes of the performers personal and social lives. We looked at how the company worked together as a group and their attempts to bring that work into the broader community. The film was part of that process. A chance to bring these faces and voices to a wider audience. It was shown for a short season at the Academy Gold Cinema.

2017
In our fourth year we set up this website to showcase our work. Together with a Youtube channel. The channel features video projects by the performers. Ranging from documentary shorts, to autobiographical pieces shot by the performers and fictional narratives devised, written and performed by the theatre company.

2018
In our fifth year with funding from the Ministry of Youth Development we set up an introductory drama course for 16 to 24 year olds with disability. The participants worked through the tried and tested approaches to theatre that founded the Many Hats Theatre Company. It allowed younger participants, some still in high school, the opportunity to experience a more advance approach to drama and performance.

​Also this year the Many Hats company devised a live improvised radio show. A new original piece inspired by the performers lives. Which looked at ways of defining and talking about disability and how it effects the performers personally. We performed the show on local radio station RDU-FM.

2019
In our sixth year the University of Canterbury invited us to be part of their Diversity Festival. We performed a show at the recently refurbished Ngaio Marsh Theatre. They also re-screened our film, 'Many Hats. Stories from a theatre company' as part of the festival.

We made great strides in the development of our new theatre space. Installing seating rostra; a new floor; painting the entire space; fitting blackout blinds and hanging an extensive lighting grid.

​In October we performed a brand new show called 'Creep'. Written and devised throughout the year by the company. A show that looked more closely at how the terms we use to define disability feature in the lives of the performers. How they see themselves and how they perceive others might see them.

​2020
In our seventh year we faced a lot of the same struggles as everyone else did in 2020. Using some of our back catalogue of video work we posted new videos on our YouTube channel during lockdown. Something to remind us all that we would be back together soon.

We also furthered the fit out on our theatre space. Installing a new sound system and adding an extensive range of new and donated lights to our grid. The large mirror ball proving most popular.

When we eventually got working again it was clear that we might face the possibility of future lockdowns. The prospect of investing all our time and energy into producing a live show that may not have an audience due to lockdown restrictions, seemed like a bad idea. So we decided to make a movie instead. A piece that would show our work practise and highlight the performers as they devise new material. It would allow us to play around with the narrative structure and introduce the performers to new techniques and experience the rigours of film making. This lead to the completion of our short film, ‘The Addams’. A look at the preparation for a show inspired by the popular cultural phenomenon of The Addams Family. We hope to screen this short film soon.

2021
In our eighth year we screened our film 'The Addams' for a short season at The Lumiere Cinema in the Arts Centre. The premier night allowed us the opportunity to invite family, friends and a new audience to share food and drinks before the screening.

Throughout the year we encouraged new members to join the company and worked at developing our latest performance called 'Head in a Box.' However Covid seemed to hamper us at every stage. From lock downs to social distancing and the eventual realization that we would not be able to safely put a live show in front of an audience. Therefore we determined to film a live stage performance which we hope to present in some way next year.

We were very lucky in securing three years worth of funding from the Ministry for Culture and Heritage. To enable us to expand what we do into other sectors of the community. We plan to start an introductory performance group for adults with intellectual disability. To train and graduate performers into the theatre company proper. We also plan to establish several new community groups. This takes time. We need to build relationships throughout the community. We are looking at a range of potential participant that may include those who are blind or have low vision; or members of the migrant and refugee community; or perhaps those with physical disability keen to learn new skills in performance. Our idea is to go out into the community and offer a space where people can tell their stories. Again Covid has slowed our progress a little, but we look forward to the wonderful potential of next year.